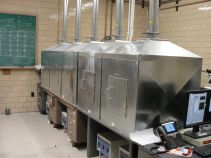 This facility host 10 vented 1500°C box furnaces for fused-silica-encapsulated growths up to 1200°C, vertical tube furnaces for growths up 1500°C in Argon atmosphere, two-zone furnace for chemical vapor transport and an arc-melt furnace for sample preparation and welding at above 2000°C. There are also two glass workbenches for sealing samples and reagents in fused silica or Pyrex tubes, under vacuum or Argon atmosphere. Our stock list of reagents at any given time includes about two-thirds of the periodic table in purified elemental form, plus a variety of compounds such as oxides, sulfides and carbonates, and all the necessary accessories for sample growths such as balances, tantalum tubes, and crucibles of many different types.

Rockland cubic multi-anvil system allows for synthesis of novel and metastable materials (including single crystals of MgB2 and 1111 Fe-based superconductors) under pressures up to 2-3 GPa and temperatures of 2,000-2,500 oC. If used in Walker multi-anvil configuration, synthesis at 6-8 GPa pressures and up to 3,000 oC temperatures can be performed.  (Rabbits are a mystery to all of us.) 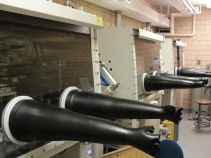 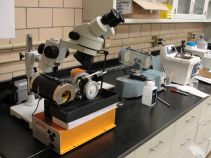 As-grown samples often need to be cleaned, polished and/or cut into specific sizes and shapes before measuring. To carry out these procedures we have an assortment of specialized equipment such as wire saws, diamond wheel saw, automatic polisher, manual polisher, ultrasonic cleaner, hydraulic press, and a variety of acids and solvents at our disposal. To prepare samples for measurements set of stereo microscopes, micro soldering iron stations, spot-welder, conducting epoxies / pastes and other miscellaneous tools are available. 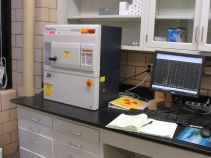 In addition to the diffractometer in the glove box we have a general purpose Desktop Rigaku Miniflex X-ray diffractometer. Has six-position sample changer and sample spinner. Used not only for phase identification and lattice parameters determination but can also identify crystallographic direction of single crystalline samples when used in the Bragg-Brentano geometry. 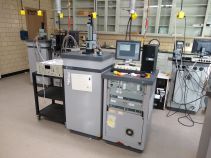 The group has several Quantum Design MPMS-5/MPMS-7 classic as well as MPMS3 SQUID magnetometers, capable of measuring magnetic moments down to ~10-7 emu, in the temperature range 1.8 K < T < 400 K, and magnetic field up to 7 T. A horizontal rotator option allows to perform angle-dependent measurements. Additional options for MPMS3 allow to extend the temperature range down to 450 mK with iQuantum 3He option and up to 1,000 K with the oven. Ames Laboratory has its own cryogenic facility which supplies these machines with liquid Helium and Nitrogen.

The group has several Quantum Design PPMS units, capable of measuring DC & AC susceptibility, DC & AC resistivity, Hall effect, magnetic torque and specific heat in the temperature range 1.8 K < T < 400 K, and magnetic field up to 14 T. The systems include a horizontal rotator insert for angle dependent measurements, and 3He and 3He/4He dilution refrigerators inserts capable of cooling down to 350 mK and 50 mK.  These units also serve as magnetic field – temperature platforms non-commercial capacitance dilatometry and thermal electric power measurements.  Whereas one of these units has a He-reliquification option, Ames Laboratory has its own cryogenic facility which supplies these machines with liquid Helium and Nitrogen. 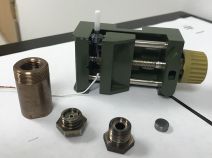 The group has Razorbill CS-100 as well as non-commercial piezostack-based strain cells used for elasto- (magneto-) resistance measurements as well as a suite of piston-cylinder, modified Bridgman and moissanite / diamond anvil cells for magnetotranspost, magnetic susceptibility, ac calorimetry, and strain gauge thermal expansion / magnetostriction measurements, that are used in Quantum Design MPMS and PPMS units as well as in stand-alone cryostats covering the pressure range of up to 10 GPa. 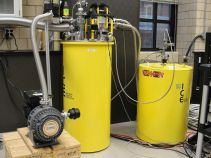 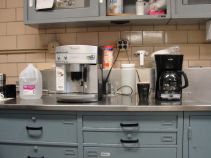 A handy asset in any research laboratory, around which many good ideas are born amidst informal discussions. We own a De’Longhi Magnifica ESAM3300 Super Automatic Espresso Machine with a 15 bar pump pressure and 373 K water temperature, 60-ounce removable water tank, a water-level indicator, a 8.8-ounce bean container, an electronic steam and coffee thermostat, rinse and decalcification auto programs, and a removable drip tray for easy cleanup. Auxiliary Mr. Coffee drip coffee maker and Deik electric kettle help to accommodate group members and visitors with other tastes.