The El Niño – Southern Oscillation (ENSO) is a natural variation of ocean temperature in the tropical Pacific and a major driver of global climate variability, including precipitation extremes and tropical cyclone activity.  ENSO has a diversity of spatial patterns that can alter its teleconnections. We show that the well-known failure of any single index to capture the diversity and extremes of El Niño-Southern Oscillation (ENSO) results from the inability of existing indices to uniquely characterize the average longitude of deep convection in the Walker Circulation. We present a simple sea surface temperature (SST)-based index of this longitude that compactly characterizes the different spatial patterns, or flavors of observed and projected ENSO events. It recovers the familiar global responses of temperature, precipitation, and tropical cyclones to ENSO and identifies historical extreme El Niño events. Despite its simplicity, the new longitude index describes the nonlinear relationship between the first two principal components of SST, and unlike previous indices, accounts for background SST changes associated with the seasonal cycle and climate change. The index reveals that extreme El Niño, El Niño Modoki, and La Niña events are projected to become more frequent in the future at the expense of neutral ENSO conditions.

Maximizing ENSO as a Source of Western US Hydroclimate Predictability 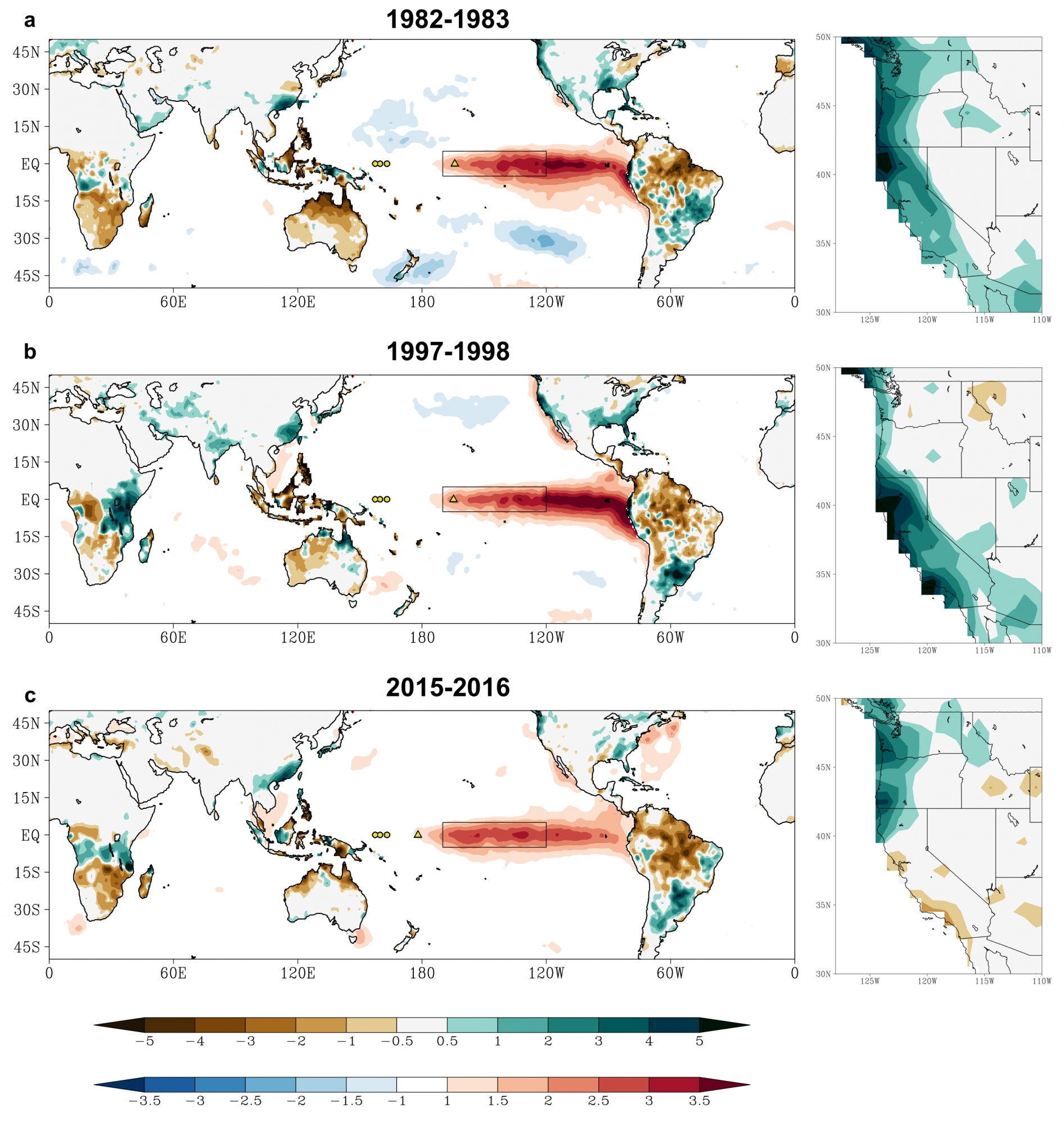 Until recently, the El Niño–Southern Oscillation (ENSO) was considered a reliable source of winter precipitation predictability in the western US, with a historically strong link between extreme El Ni.o events and extremely wet seasons. However, the 2015–2016 El Niño challenged our understanding of the ENSO-precipitation relationship. California precipitation was near-average during the 2015–2016 El Niño, which was characterized by warm sea surface temperature (SST) anomalies of similar magnitude compared to the extreme 1997–1998 and 1982–1983 El Niño events. We demonstrate that this precipitation response can be explained by El Niño’s spatial pattern, rather than internal atmospheric variability. In addition, observations and large-ensembles of regional and global climate model simulations indicate that extremes in seasonal and daily precipitation during strong El Niño events are better explained using the ENSO Longitude Index (ELI), which captures the diversity of ENSO’s spatial patterns in a single metric, compared to the traditional Ni.o3.4 index, which measures SST anomalies in a fixed region and therefore fails to capture ENSO diversity. The physically-based ELI better explains western US precipitation variability because it tracks the zonal shifts in tropical Pacific deep convection that drive teleconnections through the response in the extratropical wave-train, integrated vapor transport, and atmospheric rivers. This research provides evidence that ELI improves the value of ENSO as a predictor of California’s seasonal hydroclimate extremes compared to traditional ENSO indices, especially during strong El Niño events.