We highlighted our work in an article with The Conversation about the development of the SCID pig models for stem cell therapeutic testing.

During 2020 our lab was awarded an R24 grant from the NIH for "Developing second generation SCID pig models: filling the gaps to improve translation of therapeutics in regenerative medicine. Read more on the NIH Office of Research Infrastructures Programs website. 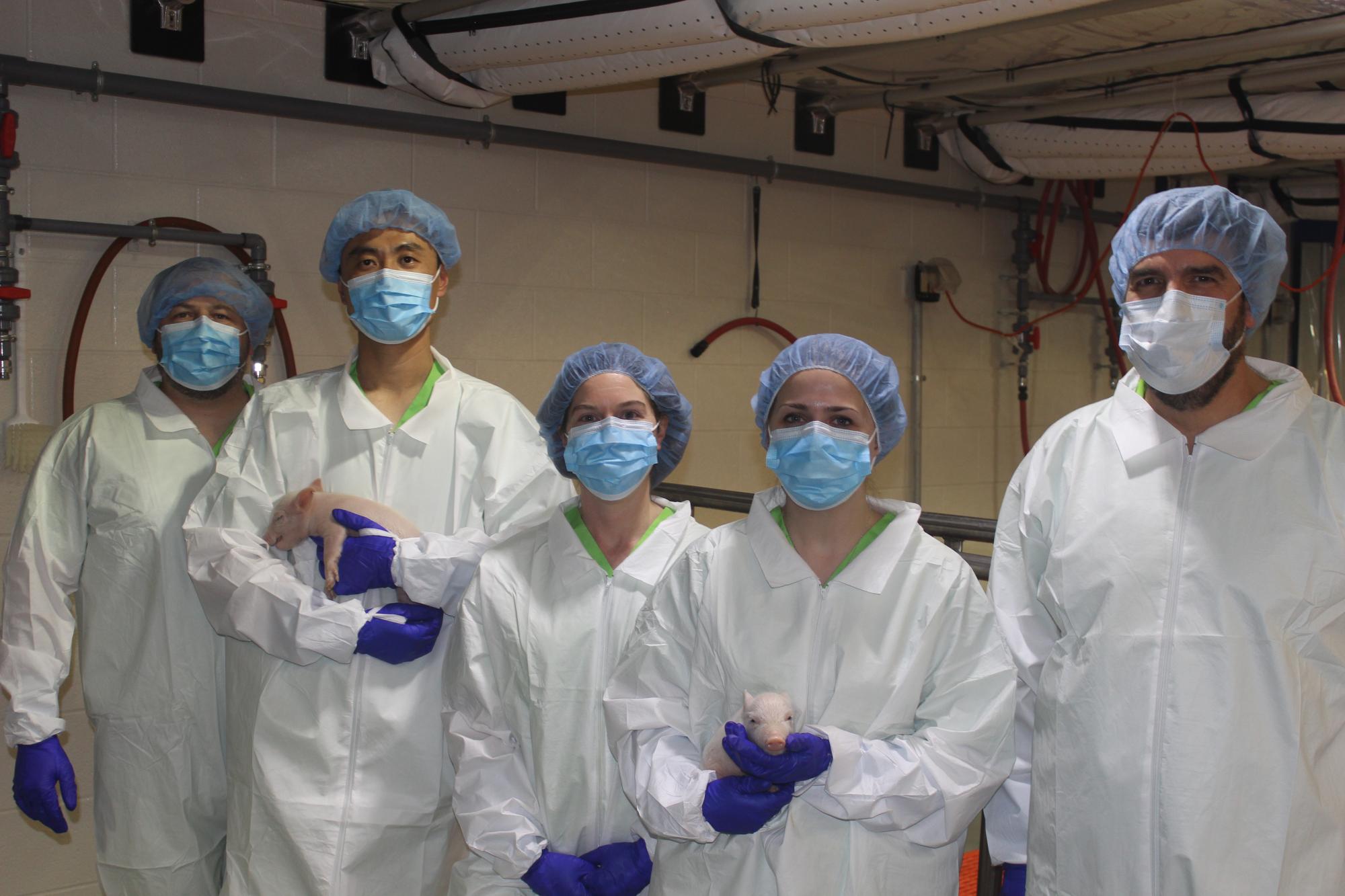 We successfully had a litter of cloned ART-/- ILR2G-/Y double mutant SCID pigs that had been implanted with human immune stem cells during gestation. These piglets had CD3+ human T cells in circulation at birth. This project was a major step towards developing and optimizing protocols for humanization of SCID pigs. To learn more about the double mutant SCID pigs, see our work on developing this model and human cell transplantation. 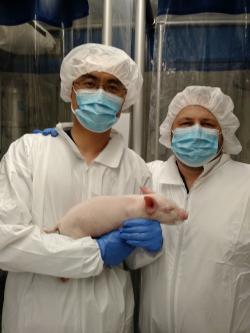 We welcomed our second litter of two cloned ART-/- IL2Rgamma-/Y double mutant piglets at the Iowa State University Laboratory Animal Research Facility.  All were delivered via C-section on 5/25/18. One piglet was rescued with a bone marrow transplant from an adult donor. He was raised to sexual maturity for siring future litters for novel biomedical research. 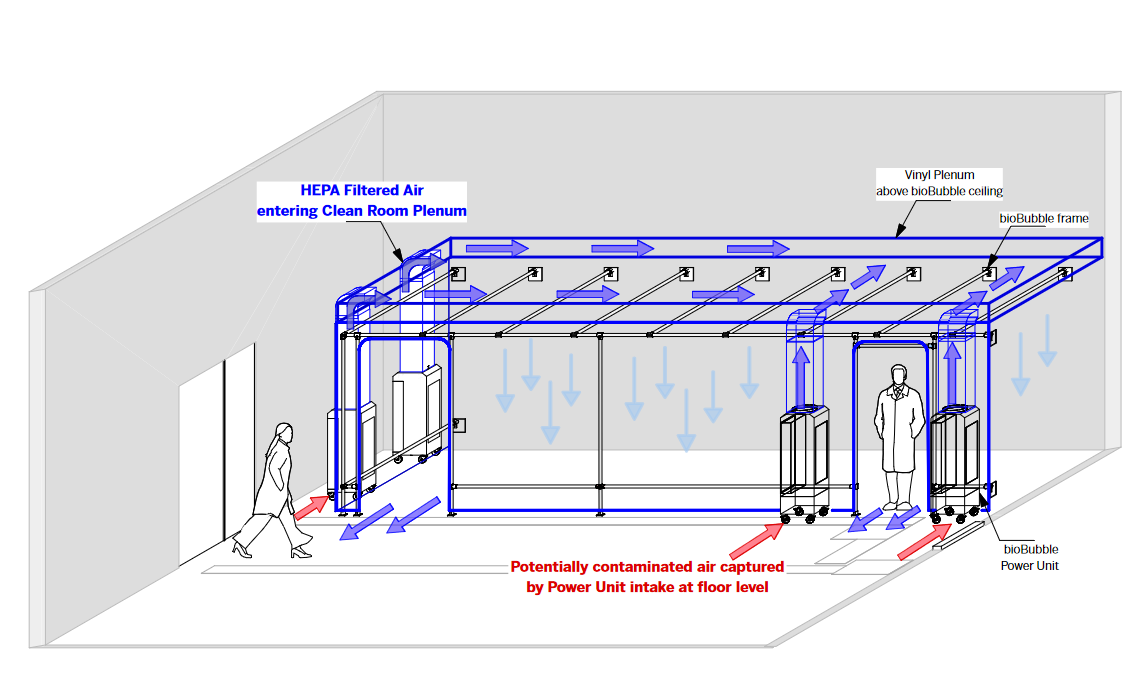 In 2017 we constructed another biocontainment facility for collaborative work. If your research group is interested in working with our SCID pigs, please see details on the ISU LAR website.

As we began to develop the SCID pig model, it was vital that we built the appropriate housing facilities to reduce exposure of the SCID pigs to pathogens. The initial construction of our bubbles included a small, short term bubble as well as a larger, long term bubble. Read about our bubbles from BioBubble. Additional information about our bubbles and associated protocols can be found in our Laboratory Animal publication.

Our group was awarded a grant from the National Institutes of Health for the development and characterization of our line of SCID pigs. The specific focus of this initial grant was to develop biocontainment facilities and rearing protocols, further characterize the immune system of the SCID pigs, as well as to explore methodologies for immunologically humanizing these animals.

In 2011, research groups from Iowa State University and Kansas State University initiated a study to assess host responses to porcine reproductive and respiratory syndrome virus in pigs that were bred for increased feed efficiency. Four pigs in the study fell ill and, upon necropsy and blood analysis, were found to have decreased numbers of lymphocytes in both tissues and blood. The parents of these pigs were identified and rebred; the resulting litter contained pigs with similar phenotypes. These studies were the first indication that our groups had identified a line of pigs with inherited primary immunodeficiency, although the genetic cause had not yet been identified in these early studies.

In a subsequent study, the immunodeficient pigs were characterized further and found to have a T-B-NK+ cellular phenotype. The underlying genetic cause of the immunodeficiency was later identified as two independent mutations in Artemis.Two separate alleles were identified in the line of pigs which cause SCID in a homozygous or compound heterozygous state.

Functional Annotations of the Chicken, Pig, and Cattle Published

An article detailing the functional annotation of eight different tissues in chicken, pig, and cattle was published in Nature Communications. 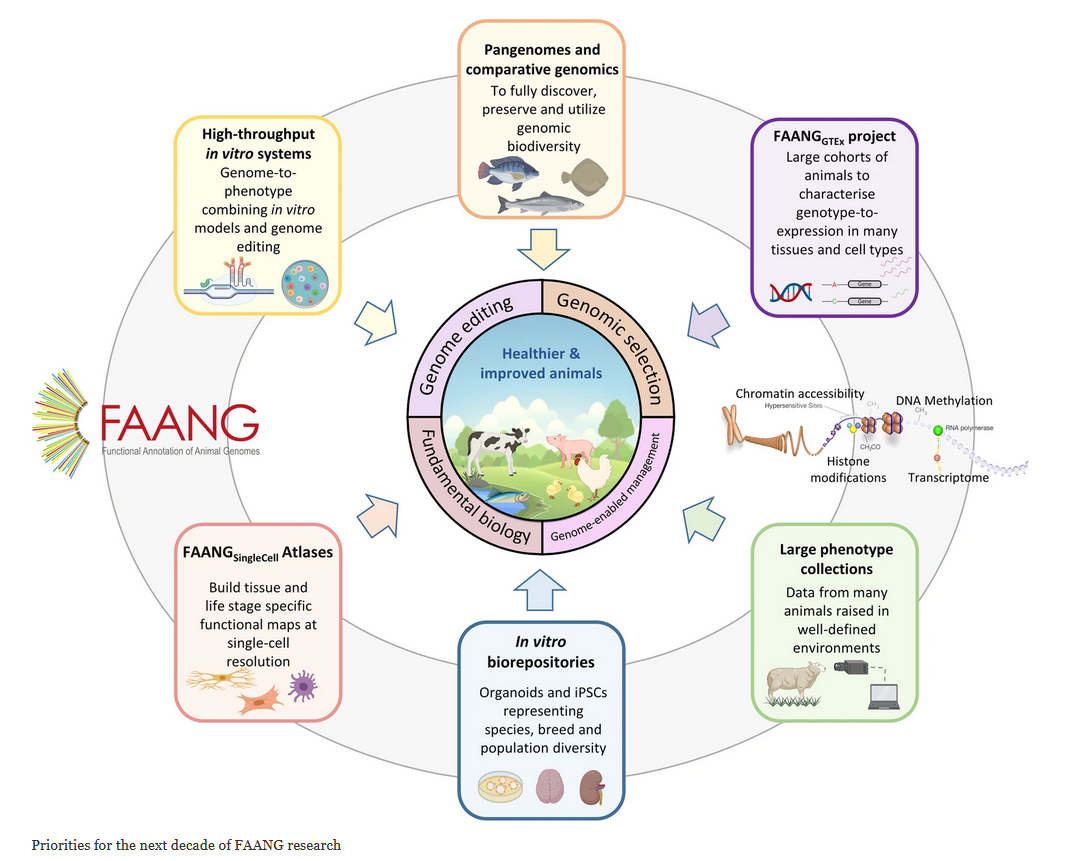 The initials stages of the FAANG project were focused on data generation for initial characterization of genomic regions, as well as the curation and annotation of livestock genomes. In this update, published in Genome Biology in 2020, members of the FAANG consortium provided an update on the outlooks of their research in the next decade. Such initiatives include better understanding the link between genetic variation and genome function, creating single-cell atlases for livestock species, as well as in vitro biorepositories, which include the development of organoids and cell lines for further study.

In a 2019 article in Annual Reviews, the FAANG Consortium provided an update on progress, which included major milestones and a view on global participation in FAANG. 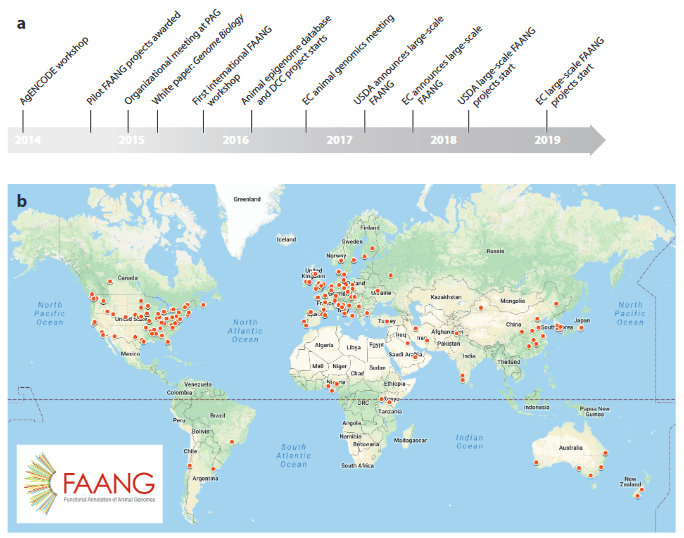 Establishment of the FAANG Consortium

In January, 2014 at the Animal Biotechnology Working Group of the EU-US Biotechnology Research Task Force the basic foundation for Functional Annotation of Animal Genomes (FAANG) consortium were discussed. The FAANG workflows and goals were guided by prior works from the Encyclopedia of DNA Elements (ENCODE) project, which initially characterized human genome elements, but was expended to other species, such as mice and fruit flies. The overarching goal of the FAANG consortium is to "produce comprehensive maps of functional elements in the genomes of domesticated animal species based on common standardized protocols and procedures. Read more about the establishment of FAANG in this 2015 article from Genome Biology.