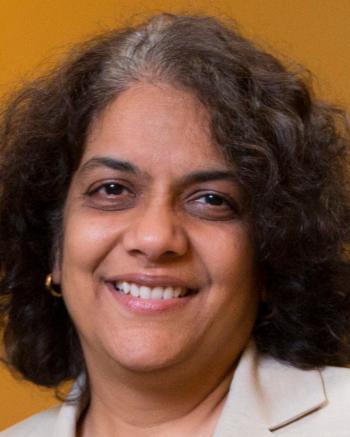 Position
Surya K. Mallapragada is Anson Marston Distinguished Professor and Carol Vohs Johnson Chair of Chemical and Biological Engineering, and the Associate Vice President for Research at Iowa State University (ISU). She received her undergraduate degree in chemical engineering from IIT Bombay and a PhD from Purdue University. She served as Chair of the Department of Chemical and Biological Engineering at ISU from 2009-13. She is also currently a Senior Scientist and has served as Program Director of Materials Chemistry and Biomolecular Materials (2004-08) at the Ames Laboratory, a US Department of Energy national laboratory in Ames, IA. Her research interests are in the area of polymeric nanobiomaterials, specifically in drug/gene and vaccine delivery and neural tissue engineering, and in the area of bioinspired materials. She has authored over 170 publications and serves as an Editor of Materials Science and Engineering: R: Reports.

Her work has been recognized by several awards including a NSF CAREER award, a 3M Non-tenured faculty award, Iowa State University Foundation Early as well as Mid-Career Excellence in Research awards, a Big 12 Rising Star Award, an IIT Bombay Young Alumni Achievement Award and the Boylan Award for Outstanding Research. She was named one of the top 100 young innovators by MIT’s Technology Review magazine and is an elected Fellow of the American Institute for Medical and Biological Engineering (2006), the American Association for the Advancement of Science (2008), the National Academy of Inventors (2016) and the International Academy of Medical and Biological Engineering (2017). She was elected a Foreign Fellow of the National Academy of Sciences, India (2018).

Surya has served the Food, Pharmaceutical and Bioengineering Division of the American Institute of Chemical Engineers (AIChE) in several capacities, including chairing the division (2008). She received the Distinguished Service Award from the AIChE’s Food, Pharmaceutical and Bioengineering Division in 2009 for sustained and committed leadership and service. She was a member of the AIChE Executive Board of the National Program Committee from 2010 to 2013. She has also served as a member of the Defense Science Study Group (2006-07) and the NIH Biomaterials and Biointerfaces Study Section (2005-10).