Our group has an interest in studying optical and transport properties of mesoscopic systems such as graphene, semiconductor and oxide heterostructures.

Stimulated by experimental advances in electrolyte gating methods, we investigate theoretically percolation in thin films of inhomogenous complex oxides, such as La_{1-x}Sr_{x}CoO_{3} (LSCO), induced by a combination of bulk chemical and surface electrostatic doping. Using numerical and analytical methods, we identify two mechanisms that describe how bulk dopants reduce the amount of electrostatic surface charge required to reach percolation: (i) bulk-assisted surface percolation, and (ii) surface-assisted bulk percolation. We show that the critical surface charge strongly depends on the film thickness when the film is close to the chemical percolation threshold. In particular, thin films can be driven across the percolation transition by modest surface charge densities \emph{via} surface-assisted bulk percolation. If percolation is associated with the onset of ferromagnetism, as in LSCO, we further demonstrate that the presence of critical magnetic clusters extending from the film surface into the bulk results in considerable volume enhancement of the saturation magnetization, with pronounced experimental consequences. These results should significantly guide experimental work seeking to verify gate-induced percolation transitions in such materials. 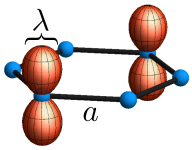 The impact of the electron-electron Coulomb interaction on the optical conductivity of graphene has led to a controversy that calls into question the universality of collisionless transportin this and other Dirac materials. Using a lattice calculation that avoids divergences present in previous nodal Dirac approaches, our work settles this controversy and obtains results in quantitative agreement with experiment over a wide frequency range. We also demonstrate that dimensional regularization methods agree, as long as the scaling properties of the conductivity and the regularization of the theory in modified dimension are correctly implemented. Tight-binding lattice and nodal Dirac theory calculations are shown to coincide at low energies even when the non-zero size of the atomic orbital wave function is included, conclusively demonstrating the universality of the optical conductivity of graphene.

We investigate the photon statistics, entanglement and squeezing of a pn-junction sandwiched between two superconducting leads, and show that such an electrically-driven photon pump generates correlated and entangled pairs of photons. In particular, we demonstrate that the squeezing of the fluctuations in the quadrature amplitudes of the emitted light can be manipulated by changing the relative phase of the order parameters of the superconductors. This reveals how macroscopic coherence of the superconducting state can be used to tailor the properties of a two-photon state. We also study the luminescence and the lasing transition at stronger coupling.