Stream restoration is an increasingly common technique used by local, state, federal, and private landowners and organizations to stabilize and improve the biological integrity of impaired channels. This process generally includes restoring a channel's geomorphic pattern and shape to be in dynamic equilibrium where it neither aggrades nor degrades. Therefore, a healthy and functioning stream should exhibit geomorphic stability while providing clean and abundant habitat for fish, waterfowl, and other aquatic organisms.

In cooperation with the Iowa Department of Natural Resources (IDNR) and Iowa Rivers Revival, Iowa State University’s Applied Geomorphology Lab (AGL) collected channel morphology data from 20 locations in the summer of 2020 to help establish regional curves for the state of Iowa. This study included field surveys in gaged and ungaged reaches in rural and urban environments in unregulated streams across the state. The 20 sites surveyed in 2020 were combined with data collected previously by the IDNR, the AGL (Carullo, 2019), and other partners. Together, these 44 locations represent the diversity of geologic, hydrologic, and meteorological settings within the state's landform regions.

Each survey included measurements of the channel geometry, bed material analysis, an estimation of bankfull discharge, and channel stability analysis. Power-law regression was then used to develop regional regression equations for bankfull cross-sectional area, width, depth, and discharge. Channel geometry data was then stratified by flood region (Figure 1) to develop three independent regional curves for comparison with composite statewide curves. By using flood regions, the regional curves developed in this study complement the regional flood frequency regression equations published by Eash and others (2013).

Figure 1: Locations of Iowa's three Flood Regions along with previously surveyed reaches and reaches surveyed in 2020. 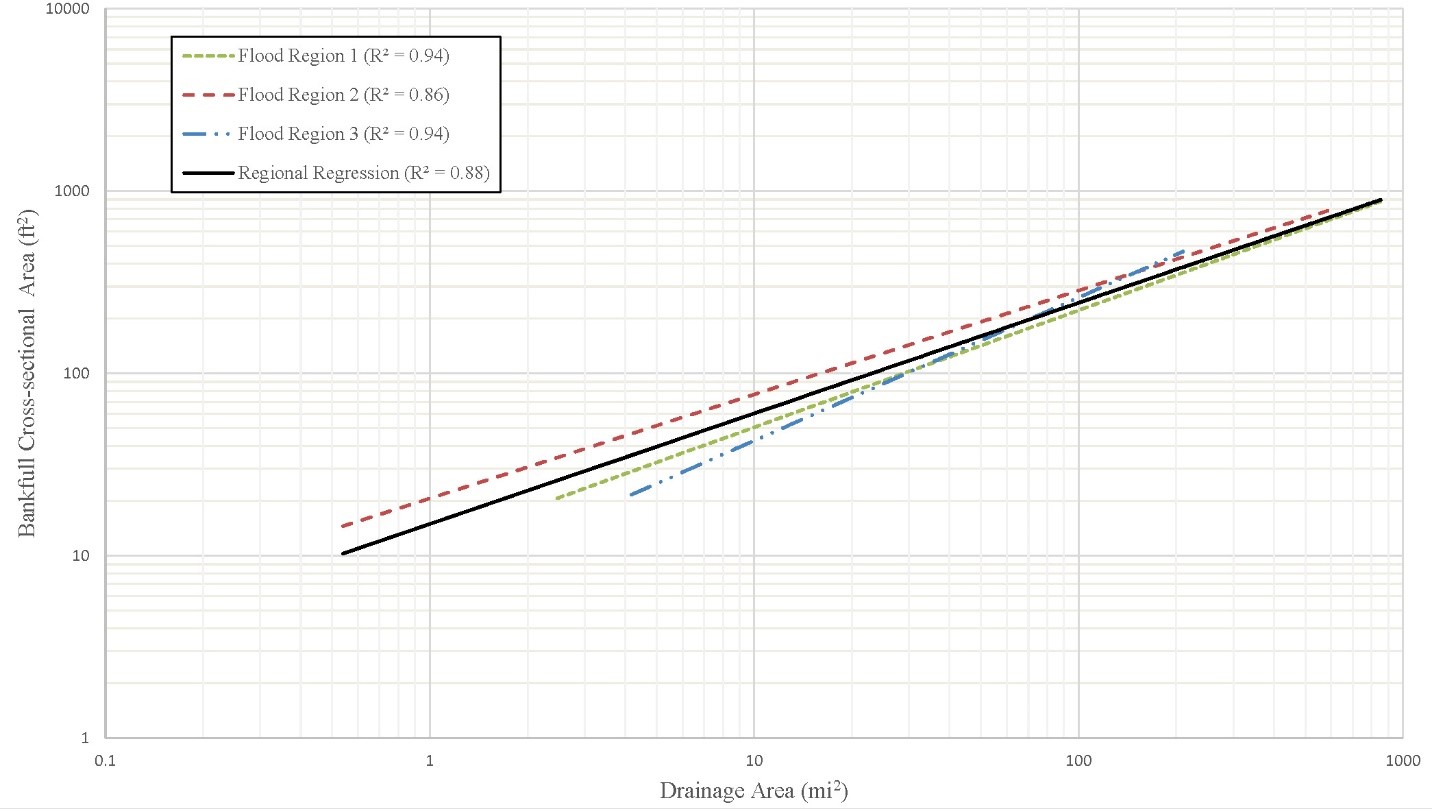 Figure 2: Bankfull cross-sectional area as a function of the drainage area for Iowa's three flood regions and the regional regression of the complete dataset.

Bankfull cross-sectional area vs. drainage area showed a very strong relationship for all regions. Watershed area can explain 88% of the variability in cross-sectional area for the complete dataset. Separating the data by flood region improved the explanatory power of the regression equations for Flood Region 1 and Flood Region 3, shown by an increase in R2 to 0.94 for both regions. Flood Region 2 showed a decrease in the explanatory power of the regression equation with a decrease in R2 to 0.86. The most significant difference between the flood regions is seen in drainage areas <10 mi2. This is likely due to the lack of data from locations with small drainage areas or the dominant land use within the basin.

Further evaluation of the predictive performance of regression equations from three of Iowa's flood regions was compared to the complete dataset. While there is an observed increase in R2 for bankfull area for Flood Region 1 and Flood Region 3, Flood Region 2 showed a decrease in predictive capability. Additionally, covariance analysis has shown that Flood Region 1 and Flood Region 3 are not statistically distinct from one another for all bankfull parameters (p-value > 0.05). Further analysis must be conducted before any definitive conclusions are made. The data collected in 2020 has shown that we still lack a sufficient amount of data that fully encompasses Iowa's diverse channel morphology and physical hydrology. Additional data is being collected by Iowa State University’s AGL over the 2021 field season to address some of these shortcomings and the complexities of urban and headwater streams within the dataset. Future analysis will include an assessment of the effects of urbanization and precipitation on channel morphology across the state of Iowa. With additional data collected during the 2021 field season, we expect to provide a set of robust regional curves for the River Restoration Toolbox by winter of 2021.

The authors would like to thank the Iowa Department of Natural Resources, Iowa Rivers Revival, and the McKnight Foundation for providing the resources and funding necessary for this project. This study includes data collected by more than a dozen people over the past three years, and we are grateful for their contributions. This work was supervised by Dr. Peter Moore of Iowa State University.