The Spitzer Space Telescope and the InfraRed Array Camera 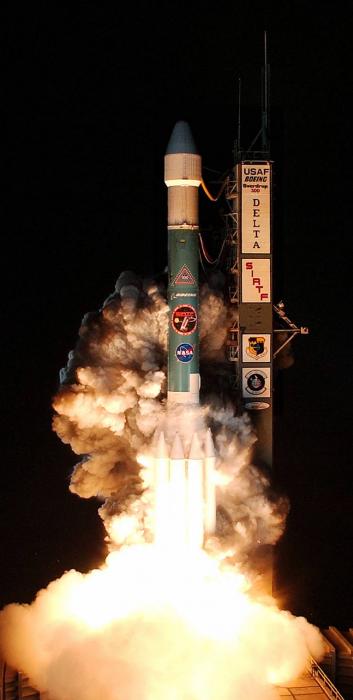 Spitzer is the last of NASA “Great Space Observatories” (the others are the Hubble Space Telescope, the Chandra X-Ray and the Compton Gamma-Ray Observatories). Launched into space by a Delta rocket from Cape Canaveral, Florida, on 25 August 2003, it is currently orbiting the Sun in a “Earth Trailing Orbit”. With its 85 cm primary mirror, cryogenically cooled by a reservoir of LHe, Spitzer is the largest infrared telescope ever launched into space (up until the launch of the James Webb Space Telescope).

Infrared light, or heat energy, allows  studying the properties of cool astronomical objects through their thermal emissions, like cool stars, brown dwarfs and extrasolar planets. In addition, infrared radiation can penetrate the screen of dust pervading our galaxy: this means that in the infrared we can study regions of space that we cannot see in visible light, such as the dusty center of our galaxy or newly formed stars still embedded in their dusty cocoons. These observations are severely limited from the ground, because water vapor in Earth's atmosphere absorbs much of the infrared radiation. Spitzer, on the other end, takes advantage of the exceptionally stable and cool environment of deep space, which results in unprecedented sensitivity and image quality.

Since May 2009 Spitzer has exhausted the LHe keeping its telescope and detector cool. In these conditions both IRS and MIPS cannot work anymore. Two of the 4 IRAC detectors, operating at 3.6 and 4.5 μm, can however still function producing images with almost the same sensitivity as in the cryogenic mission. For this reason, Spitzer has started a “warm mission” (still ongoing as of August 2018) during which the observatory is operated to take pointed images and surveys in these two remaining IRAC bands.

IRAC was built by the NASA Goddard Space Flight Center (GSFC) with management and scientific leadership by the Smithsonian Astrophysical Observatory (SAO) at CfA under principal investigator Giovanni Fazio. The camera  provides simultaneous 5.2’x5.2’ images in four bands at 3.6, 4.5, 5.8 and 8.0 μm. Two adjacent fields of view are imaged in pairs (3.6 and 5.8 μm; 4.5 and 8.0 μm) using dichroic beam splitters.  All four detector arrays in the camera are 256 × 256 pixels in size, with a pixel size of ~1.2′′ × 1.2′′.  The two short wavelength channels use InSb detector arrays and the two longer wavelength channels use Si:As detectors. IRAC was designed with sensitivity in mind: among its most spectacular accomplishments in the first 5 years of its mission are the first direct detection of light coming from an extrasolar planet (Charbonneau et al. 2005), the first mapping of the surface temperature of another planet (Knutson et al. 2007), the light that may come from the first objects in the universe (Kashlinsky et al. 2005), and fundamental contribution to understand star formation, the interstellar medium, stellar populations including brown dwarfs, galaxy evolution and dynamics, and cosmology. After the exhaustion of the Spitzer cryogenic fluid in May 2009 2009, IRAC is still able to operate without loss of performance at 3.6 and 4.5 μm, during the ongoing “warm” mission after the end of the nominal Spitzer operations.

Calibration of the IRAC extended PRF 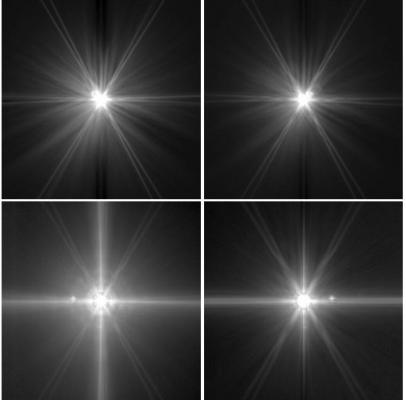 As part of the IRAC science team at SAO I have participated in the calibration, test and scientific verification of the camera during the In-Orbit Checkout (IOC) and Science Verification. Since then, I have worked on the characterization of IRAC long lived latents, and the IRAC High Dynamic range Point Response Function (PRF).

The PRF is the response function of the telescope and camera system (optical train and electronics) to the observation of a point source (a source whose size is below the angular resolution power of the telescope). Due to the physics of optical systems, a point source observed through a telescope of finite aperture does not appear like a “point”, but rather like a pattern of concentric rings and radial structures determined by the diffraction of light. This pattern is called Point Spread Function (PSF). When the PSF is recorded by the camera detector arrays, it is sampled on a discrete grid of pixels each characterized by a specific response function. The PRF is the image of the PSF as recorded by the camera detectors. In the deep space environment in which Spitzer operates, the IRAC PRF is exceptionally stable. By combining the repeated observations of 6 nearby stars with different brightness (Vega, Sirius, Fomalhaut, ε Eridani, ε Indi and BD +68 1022), I have built a “High Dynamic Range” PRF for IRAC. This PRF has a S/N as high as 106 and shows structures covering most of the area of the four IRAC arrays.

This characterization of the IRAC PRF is extremely important because it allows the scientific analysis of data taken in presence of very bright objects:

For examples of these two techniques in action, see: characterization of Asymptotic Giant Branch stars with IRAC and the search of planetary mass companions around nearby stars.