Cotton fiber and the domestication process

One of the most interesting aspects of the cotton genus is that 4 different species were independently domestication, in each case extending back thousands of years. Two of these species are diploids (n=13) whereas the other two are allopolyploids (n=26). Thus, we have the most unusual opportunity to study the biology that underlies the evolution, under strong directional human selection, of a new phenotype, in this case the long, strong, fine, white fiber of modern cotton cultivars (see figure below, comparing domesticated, top, to wild seeds, bottom.

This natural system allows us to address one of the exciting opportunities stimulated by the convergence of modern genomic approaches with other areas of biology is that of resolving the enigmatic processes by which new phenotypes arise. 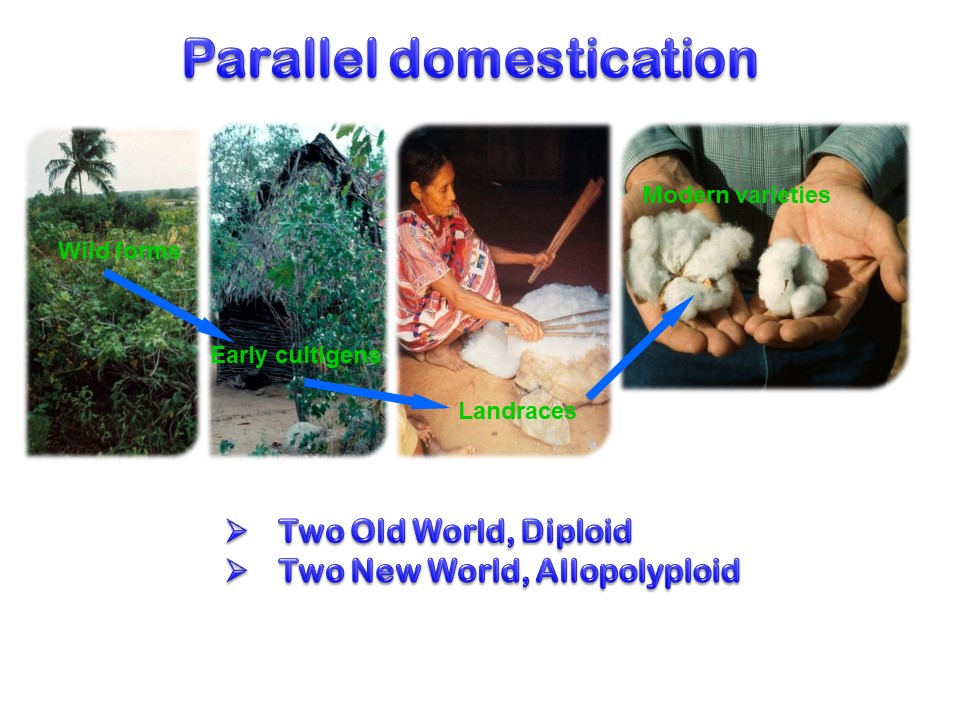 We are using comparative approaches combined with advanced population development to will reveal the steps and complexities involved in transforming primitive trichomes to the economically important fibers of modern cotton cultivars. Our goal is to understand the genetic causes and system-wide effects that underlie phenotypic change. An exciting dimension to our work is that it involves domestication at both the diploid and allopolyploid levels, permitting us to explore the possibility that polyploid formation created novel opportunities for phenotypic evolution. Also, because two different allopolyploid species were independently domesticated, we have an outstanding opportunity to evaluate parallelisms and convergences in the underlying genetic architecture associated with plant domestication and morphological evolution.

We are using a number of tools in this effort, including comparative transcriptomic and proteomic profiling. One example is that of Yoo and Wendel (2014; see publication page), where the most important cotton species, Gossypium hirsutum, was studied.  This is an allopolyploid species (containing two different genomes) which initially was domesticated approximately 5000 years ago, and which primarily is grown for its single-celled seed fibers. Strong directional selection over the millennia was accompanied by transformation of the short, coarse, and brown fibers of wild plants into the long, strong, and fine white fibers of the modern cotton crop plant.

To explore the evolutionary genetics of cotton domestication, we have conducted transcriptome profiling of developing cotton fibers from multiple accessions of wild and domesticated cottons. Comparative analysis revealed that the domestication process dramatically rewired the transcriptome, affecting more than 5,000 genes, and with a more evenly balanced usage of the duplicated copies arising from genome doubling. We identified many different biological processes that were involved in this transformation, including those leading to a prolongation of fiber elongation and a reallocation of resources toward increased fiber growth in modern forms. The data provide a rich resource for future functional analyses targeting crop improvement and evolutionary objectives.

In our future work we hope to combine the use of advanced synthetic populations, such as near-isogenic introgression lines (where we have "tiled" the genome from wild cotton into the same cultivated cotton backgroud) with field grow-outs to identify genomic regions that most strongly have transformed wild cotton into the modern forms.  Once identified, we can harness the power of comparative genomics, transcriptomics, and network approaches to dissect the genetic architecture of cotton fiber development, and of all of the biology that lies between genotype and phenotype.