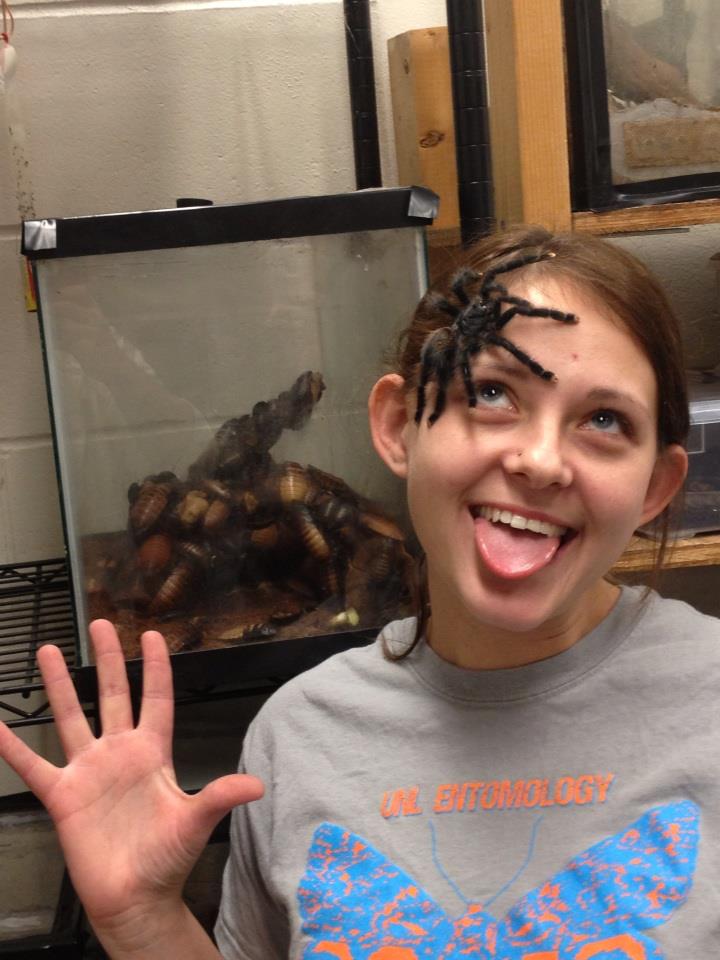 Ginny Morgal. Ginny graduated with a BS in Insect Science from the University of Nebraska – Lincoln. During her undergraduate program she worked as a beekeeper for Dr. Marion Ellis and as a teaching assistant for Dr. Tiffany Heng-Moss. Ginny completed her senior thesis on the effects of formic acid on the brood area and development of Apis mellifera. Ginny began her position as Insect Zoo Educational Program Coordinator at Iowa State University in May of 2012. Since beginning her position the Insect Zoo has continued to bring quality education programs to people ages 3-103 all over Iowa. Ginny has also implemented several new programs including termite pheromone activities and behavior experiments with Madagascar Hissing Cockroaches. Ginny continues to work on developing more programs for students grades 5-12 in hopes to strengthen the role of arthropods in the secondary education classrooms. Programs based on aquatic insects have been a recent priority, with the help of other members of the Courtney lab. 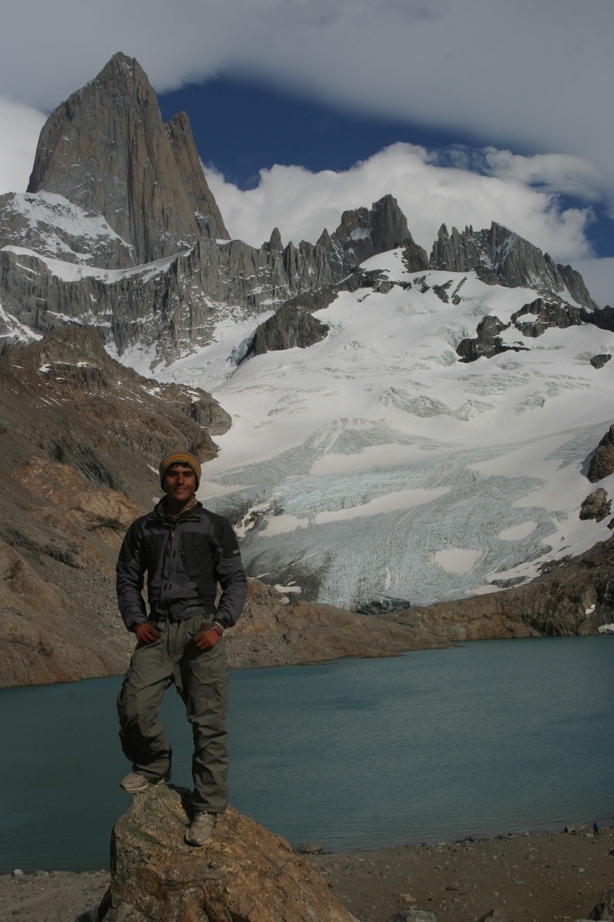 Ruben (Isai) Madriz. The lab's most recent graduate (December 2017), Isai’s interests focused on the ecological adaptations, phylogeny and biogeographical distribution of Diptera. His core research project at ISU was a systematic revision of the “Primitive Craneflies” (family Tanyderidae), a poorly known group of aquatic nematocerous Diptera. Tanyderidae are rarely collected and little is known about the family’s natural history. Species concepts within the family have been broad and based on a limited suite of characters. One of the primary goals of Isai's revision was reexamining species diversity using existing and new character systems, supplemented with intensive sampling and field observation of the North American and Patagonian fauna. Furthermore, his work reevaluated the group’s classification utilizing morphological and molecular characters within a cladistic framework, allowing further inference such as historical patterns of biogeography. Isai also conducted biotic inventories of other aquatic insects in Patagonia, a project that aimed to develop reliable rapid survey techniques of the taxonomic composition and diversity of stream ecosystems. These tools can be used to improve biodiversity knowledge and assist in the conservation and protection of the region’s aquatic biota. Isai currently is a Fulbright - National Geographic Fellow studying the insect fauna surrounding the Northern Patagonia Ice Field. 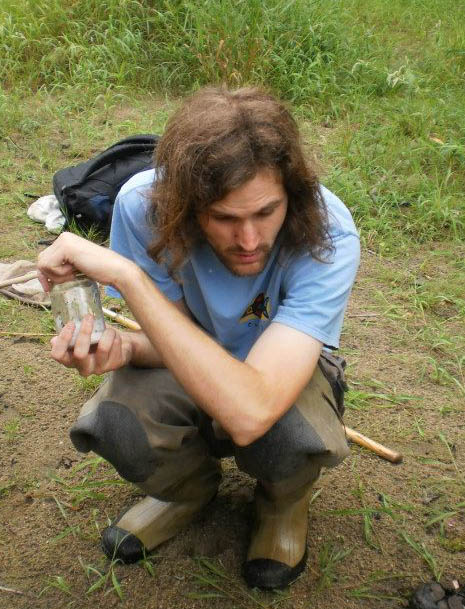 Andrew Fasbender. Andrew’s research focused on the biodiversity and phylogenetics of Ptychopteridae (Phantom Crane Flies), a small family of lower Diptera associated with saturated organic sediments. One of the primary outcomes of his project was compilation of a monograph of the family, as the group has suffered from insufficient taxonomic review outside of Europe. Andrew's investigation provided comprehensive descriptions and illustrations of the global ptychopterid fauna from both extant subfamilies (Bittacomorphinae and Ptychopterinae), including basic ecological information for the Nearctic taxa. Additionally, the current classification of the family had been based on pre-cladistic methodology and was in need of reevaluation with modern methods and phylogenetic concepts; particularly the large and morphologically heterogenous genus Ptychoptera. Andrew expanded morphological datasets to examine the phylogeny of Ptychopteridae at multiple levels, from relationships between species to the placement of the family within the wider phylogeny of lower Diptera. This resulted in the characterization of the diversity and homologies of often complex morphology within Ptychopteridae, as well as the evaluation of a wide range of taxa across lower Diptera. Outside of his dissertation research, Andrew has broad interests in comparative morphology, species diversity, and the natural history of Diptera, particularly Anisopodidae, Trichoceridae, and Mycetophilidae s.l., among other groups. Andrew completed his PhD in 2014 and now is a Research Scientist at Rhithron Associates, Inc. in Missoula, MT. 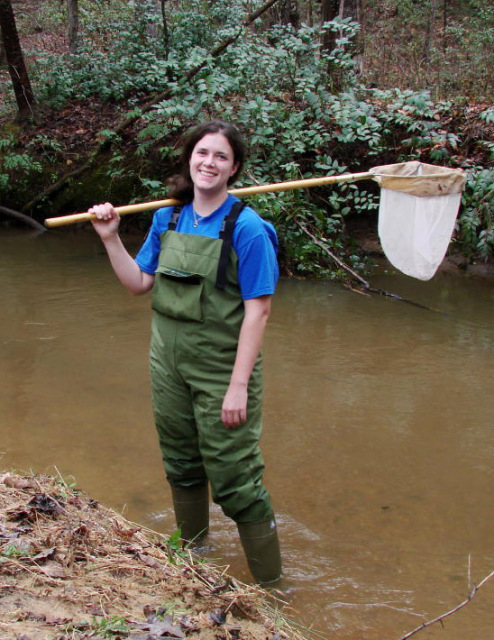 Rebecca (Brown) Sam.  Becky's interests focused on the phylogeny and biogeography of Edwardsininae, a subfamily of Blephariceridae (Diptera) containing two genera, Edwardsina and Paulianina. While Blephariceridae are found on all continents excluding Antarctica, and on several continental islands (ex: Madagascar, New Zealand, Sri Lanka), Edwardsininae is confined to South America, Madagascar, Australia, and Tasmania, exhibiting a Gondwanan distribution. Becky conducted a systematic revision of the genus Paulianina, which is endemic to Madagascar. Recent collecting has greatly increased the number of known species. While Paulianina was thought to be monophyletic, there remained questions regarding the monophyly of the two subgenera within Paulianina, Paulianina (sensu stricto), and Eupaulianina. Becky's research addressed this question using morphological and molecular data sets. Becky was also an active participant in the Insect Zoo outreach program.

Jessica (Davis) Petersen. Jessica's research focused on combining an understanding of macroecological patterns with macroevolutionary processes. Her Ph.D. project examined aspects of taxonomy, evolution and ecology to form a rather complete picture of one group of flies. The first and most basic part included a systematic revision of a little known, semi-aquatic group of crane flies (Diptera, Tipuloidea). Her revision included an analysis of the evolutionary relationships among species of Neophylidorea by creating a phylogeny using molecular and morphological characters. This phylogeny provided a foundation to investigate macroecological patterns in an evolutionary framework. Jess took a top-down approach by first looking at broad scale climate envelopes which may be limiting the ecological distribution of species of Neophylidorea. From there she delved into smaller spatial scale questions about modes of speciation, interactions such as competition, historical biogeography, dispersal ability, extinctions, invasion potential, and responses to future climate change. Jess also led the Adopt-a-Trap: Iowa Insect Survey Project, which used a series of Malaise traps and the assistance of many students, educators and volunteers to gather baseline data on the state's insect fauna. Jessica completed her Ph.D. in 2010 and is an Invertebrate Ecologist for the Minnesota Department of Natural Resources. 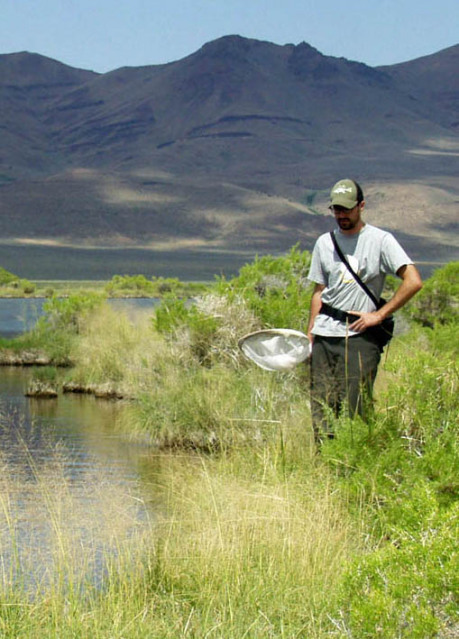 Matthew Petersen. Matt was interested in how the ecological adaptations and biogeographic distributions of crane flies (Tipuloidea; Diptera) have been affected by their evolutionary history. Crane flies, a diverse clade containing over 15,000 species, have radiated to occupy a broad spectrum of larval habitats. While much work has been done to understand species richness, considerably less attention as been given to the taxonomy and classification of the group. This lack of attention has led to many problematic taxonomic divisions and maintenance of numerous paraphyletic genera. Matt's research addressed the problematic taxonomic structure while simultaneously examining why there is such diversity within this clade of flies. Through a cladistic analysis utilizing both morphological and molecular characters, his work provided a framework by which the taxonomy of the group will be based. This revised taxonomic framework provides insight into the origin of complex ecological adaptations and helps elucidate whether certain adaptations have created the observed species richness. Matt also conducted a systematic revision of the genus Lipsothrix. Matt completed his Ph.D. in 2008 and currently is an Assistant Professor at University of Minnesota.