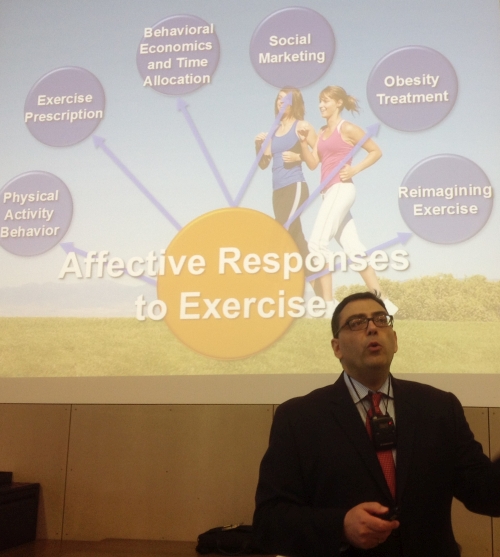 The long-term aim of this research is to develop new methods for prescribing exercise and recommending physical activity to the public, taking into account not only the maximization of fitness or health benefits and the minimization of risk, but also the promotion of pleasure and the potential for continued exercise and physical activity involvement over the long haul. 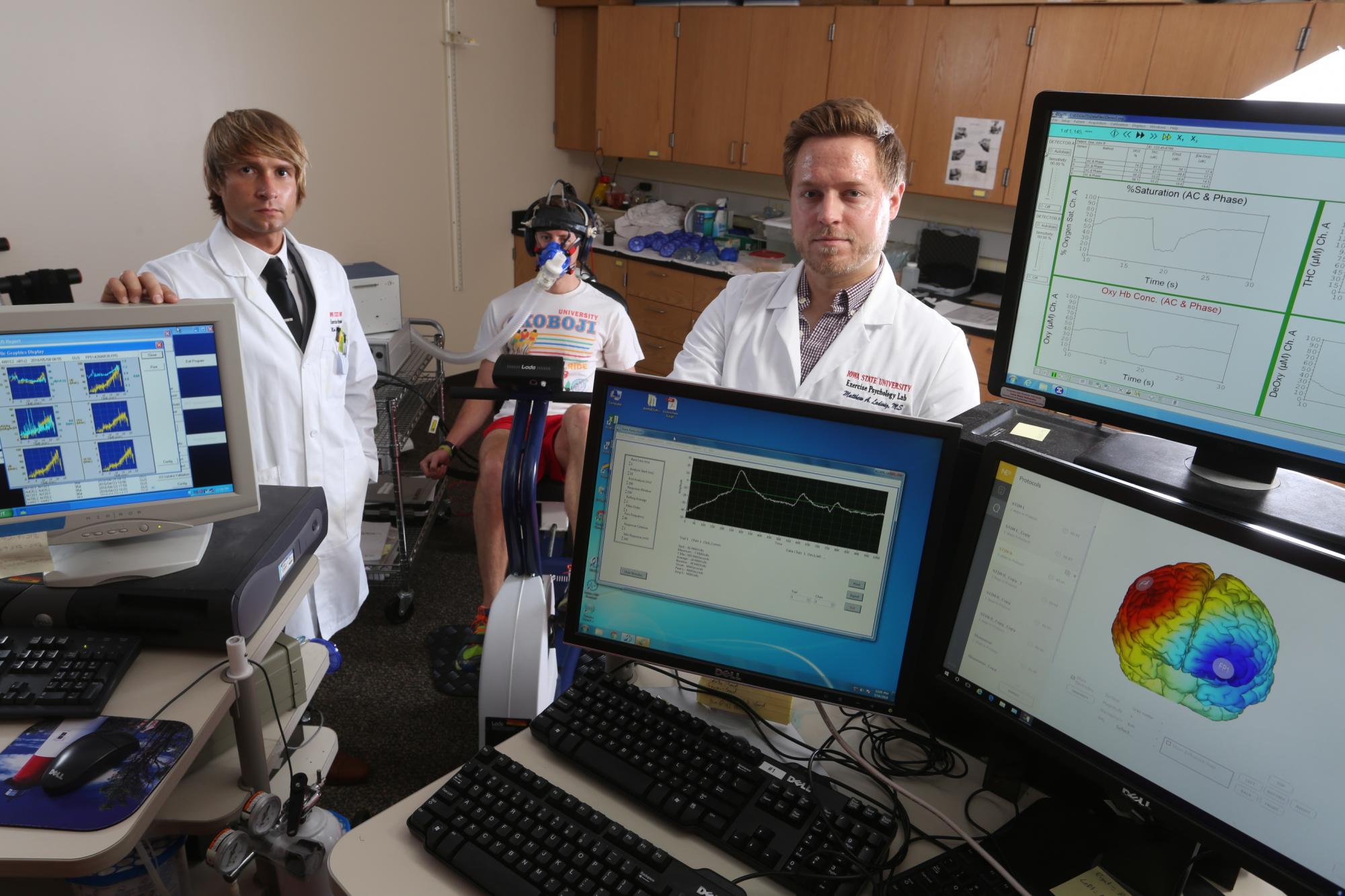 There is a complex relationship between the intensity of exercise and affective responses. During and for a short period following moderate-intensity exercise, most people respond positively. During exercise performed at an intensity that approximates the gas exchange ventilatory threshold, there is considerable variability from individual to individual, with some responding positively and others responding negatively. These differences can be accounted for to some degree by individual differences in preference for and tolerance of the somatic sensations associated with vigorous exercise, as well as by differences in cognitive factors, such as self-efficacy. Beyond the gas exchange ventilatory threshold, where a physiological steady-state can no longer be maintained, there is a near-universal decline in the valence of affective responses. At this level, ratings of affective valence (positivity versus negativity) are primarily correlated with physiological parameters (i.e., ventilation, blood lactate).

The guiding conceptual framework of this research is the dual-mode theory of exercise-induced affective responses. According to this theory, affective responses to exercise are jointly influenced by two coacting factors, namely cognitive factors, such as physical self-efficacy, and interoceptive (e.g., muscular or respiratory) cues that reach the affective centers of the brain via subcortical routes. The balance between these two determinants is hypothesized to shift systematically as a function of exercise intensity, with the cognitive factors being dominant at low intensities and interoceptive cues gaining salience as intensity approaches the individual's functional limits and the maintenance of a physiological steady-state becomes impossible.

The Dual-Mode Theory assumes that the range of exercise intensity consists of three domains that reflect differences in underlying metabolic processes and oxygen uptake kinetics. The three domains are delimited by three landmarks: (a) the lactate threshold (LT), (b) the level of critical power (CP) or maximal lactate steady state (MLSS), and (c) maximal oxygen uptake. In our research, we use the gas-exchange ventilatory threshold (VT) and the Respiratory Compensation Point (RCP) as less invasive approximations of the LT and the CP/MLSS, respectively.

Importantly, each domain of intensity has distinct adaptational implications and is characterized by a distinct pattern of affective changes, consistent with the assumption of Dual-Mode Theory that affect is closely tied to homeostatic regulation.

The first domain, termed the domain of moderate exercise, includes the intensities up to the LT (i.e., the exercise intensity at which blood lactate accumulation starts to exceed baseline values, as the rate of production from working muscles exceeds the rate of clearance) or VT (i.e., the exercise intensity at which the volume of carbon dioxide produced starts to exceed the volume of oxygen consumed).

In the moderate domain, affective responses either remain positive or are further improved for most healthy individuals. The potential for this range to generate positive affective experiences appears to be further enhanced if the intensity is self-regulated, as in a self-paced walk. This prediction is supported by empirical data on samples of healthy young, middle-aged, and older adults. However, among low-active individuals with obesity, weight-bearing activity such as walking, even exercise within the moderate domain of intensity has been found to lead to declines in affective valence.

The second domain of intensity, termed the domain of heavy exercise, extends from the LT/VT to CP/MLSS. The CP/MLSS typically occurs at 70-80% of maximal heart rate or 60-70% of maximal oxygen uptake in nonathletic adults. In this domain, given sufficient duration, the rate of lactate clearance can "catch up" with the rate of production, leading to a restabilization of lactate concentration over time. This again allows the establishment of a physiological steady-state but at a higher level of lactate and oxygen uptake than the steady-state attained in the moderate domain. This is due to the appearance of a "slow component" of oxygen uptake, reflecting a loss of muscle efficiency. Exercise within the heavy domain cannot be continued indefinitely. If the upper boundary of this domain is exceeded, lactate will continue to rise. Thus, the upper boundary of this domain is also termed the "maximal lactate steady-state" (MLSS).

The domain of heavy exercise intensity is characterized by interindividual variability in affective responses, with some individuals reporting improvements and others reporting declines in affective valence. This heterogeneity may be associated with the ambiguous adaptational implications of exercise at this range of intensity. On the one hand, exercise within this range may entail adaptational advantages (e.g., covering longer distances in search of subsistence resources, persisting in the pursuit of prey) but, on the other hand, it raises the risk of adverse events (e.g., exhaustion, injury). It should also be emphasized that, while variability is found among participants that represent a wide range of physical activity and fitness levels, most chronically hypoactive adults report declines in affective valence in response to exercise that exceeds the LT/VT.

The third domain, termed the domain of severe exercise, extends from CP/MLSS to peak oxygen uptake. In this domain, it is no longer possible to maintain a physiological steady state. Physiological parameters, such as oxygen uptake and blood lactate, rise continuously and exercise is terminated within a few minutes.

The domain of severe exercise intensity is characterized by universal declines in affective valence. Although there may be variability in the rate of decline, the direction of change is negative for all individuals. Presumably, this homogeneous decline reflects the unambiguous adaptational implications of exercise in this range of intensity. The severe homeostatic perturbation, the impending metabolic crisis, and the specter of irreparable harm or death necessitate that a clear imperative be communicated to consciousness that the intensity must be immediately reduced or the activity must be stopped.

The Dual-Mode Theory further postulates that affective responses to exercise are regulated by an extensive network of brain regions that largely overlaps with the network responsible for regulating affective responses to exteroceptive (e.g., visual) affective stimuli (i.e., what Feldman Barrett and coworkers have described as the "affective neural reference space" or "affective workspace," including, but not limited to, the insula, the anterior cingulate, the medial, dorsal, and orbital divisions of the prefrontal cortex, and the ventral striatum). In the affect-regulation literature, neuroimaging evidence suggests that, in the presence of aversive or unpleasant stimuli, increased activity in the (medial and dorsal) prefrontal cortex is typically coupled with attenuated activity in the amygdala, with the increase in prefrontal activity and the decrease in amygdala activity being indicative of effective coping. Accordingly, the Dual-Mode Theory predicts that increased prefrontal activation in the heavy domain of intensity (when the challenge posed by exercise is substantial but not yet overwhelming) would be associated with the maintenance of positive affective valence. In contrast, in the severe domain of intensity (when the challenge posed by exercise becomes overwhelming), decreased prefrontal activation combined with increased activation of the amygdala would account for the observed decline in affective valence.

The practical implication for exercisers and exercise professionals is that attempts to use cognitive techniques to improve affective responses within the severe domain (e.g., attentional dissociation, boosting self-efficacy, cognitive reframing or reappraisal) would likely be ineffective because the biological substrate of these interventions (i.e., the prefrontal cortex) would be hypoactive.

Recommended Readings on the Dual-Mode Theory

What are we working on now?

We presently have two active research foci that, arguably, represent two of the most vexing research questions in exercise science. First, we are investigating the neural basis of the sense of exertional physical fatigue, using a unique combination of psychophysiological methods. The outline of our conceptual approach can be found in Hartman et al. (2019). 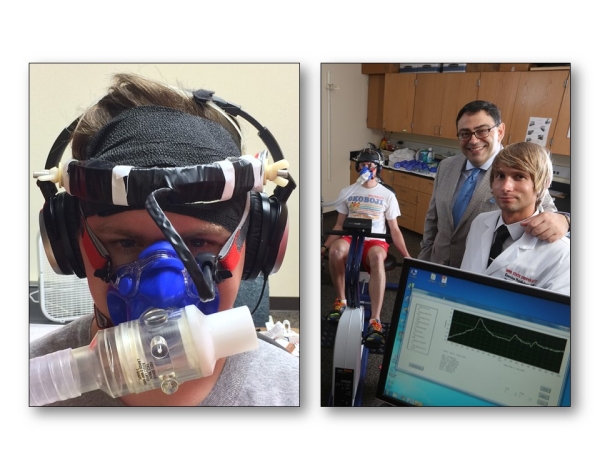 Second, we are investigating how affective experiences associated with exercise and physical activity register in memory to create an "affective valuation" that may act as either an urge for or a deterrent to future participation (an example of our conceptual approach can be found in Zenko and Ekkekakis, 2019). To this end, we have collaborated with Professor Ralf Brand (University of Potsdam, Germany) to develop the Affective-Reflective Theory (ART) of exercise and physical inactivity. The ART predicts that reflective processes (e.g., knowledge and appreciation of the benefits of exercise, self-efficacy appraisals) may be positive (a vector propelling the individual to be active) but past affective experiences associated with exercise or physical activity may be negative (a vector restraining the individual to a sedentary state). In order to motivate exercise or physical activity participation, the reflective and the affective processes must be concordant; interventions designed to promote exercise or physical activity should address both.

Interventions based on the Affective-Reflective Theory (ART) of exercise and physical inactivity would seek to radically change current norms of professional practice. Besides typical consultation sessions designed to target relevant cognitive appraisals (e.g., shift the balance between perceived benefits vs. barriers, increase self-efficacy, foster perceptions of autonomy, competence, and relatedness), ART-based interventions would also include evidence-based, systematic approaches to improve the affective experience of exercise or physical activity.